The stash might have links to the Norse god Odin.

An amateur treasure hunter wielding a metal detector has discovered a stunning gold hoard buried by an Iron Age chieftain in the sixth century in what is now Denmark. The stash includes lavish jewelry, Roman coins and an ornament that may depict a Norse god.

The treasure hunter, Ole Ginnerup Schytz, uncovered the Iron Age hoard on land owned by one of his former classmates in the town of Vindelev, earning the stash the name “Vindelev hoard.” Within a few hours of surveying the area with his newly acquired metal detector, Schytz heard the telltale beeping of possible treasure. It turned out to be one of the “largest, richest and most beautiful gold treasures in Danish history,” representatives of Vejle Museums said in a statement released Sept. 9. 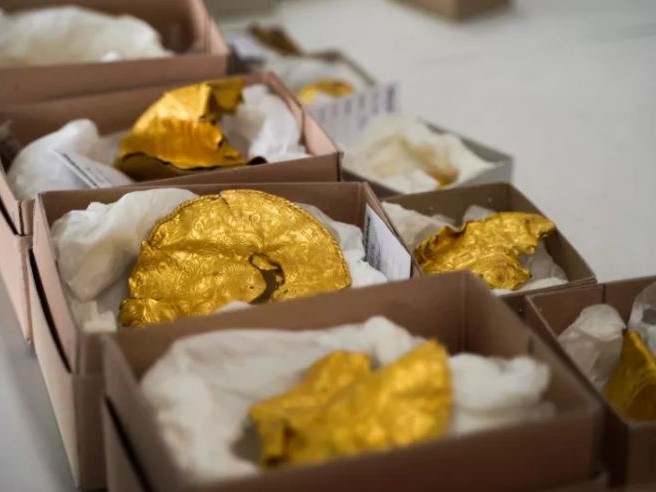 The 1,500-year-old hoard contains nearly 2.2 pounds (1 kilogram) of gold, including large, saucer-sized medallions known as bracteates. An excavation of the site by archaeologists from Vejle Museums, in collaboration with the National Museum of Denmark, revealed that the gold valuables were buried in a longhouse, which may indicate that Vindelev was a powerful village during the Iron Age.

A high-status person at the time likely buried the hoard, the archaeologists surmised. “Only a member of the absolute cream of society would have been able to collect a treasure like the one found here,” Mads Ravn, head of research at Vejle Museums, said in the statement.

The town of Vindelev is about 5 miles (8 kilometers) from Jelling, a cultural hotspot where the first monarchs ruled when they united (or reunited) the country in the 10th century. Until now, “there was nothing that indicated that a previously unknown warlord or chieftain lived here [in Vindelev], long before the kingdom of Denmark arose in the following centuries,” Ravn added.

However, it appears that the chieftain who owned this hoard managed to garner wealth and attract skilled artisans who crafted the treasures.

Bracteate with the face of a man, a horse and runes. (Image credit: Conservation Center Vejle)

The hoard contains several bracteates, as well as Roman coins molded into jewelry using a unique technique that hadn’t been seen before, the archaeologists noted. Some of the gold artifacts’ motifs and runic inscriptions likely reference contemporary rulers, but others may refer to Norse mythology. For instance, one bracteate shows a man with braided hair surrounded by images of a horse, bird and another man  — as well as runes (ancient or mysterious letters) that may translate to “houaʀ” or “the high one.”

It’s possible that “the high one” refers to a ruler, perhaps even the chieftain who buried the hoard. But according to later Norse mythology, this term is associated with the deity Odin, the archaeologists said.

The hoard also has older coins from the Roman Empire, including a heavy gold coin depicting Constantine the Great (A.D. 272-337), the first Roman emperor to convert to Christianity. 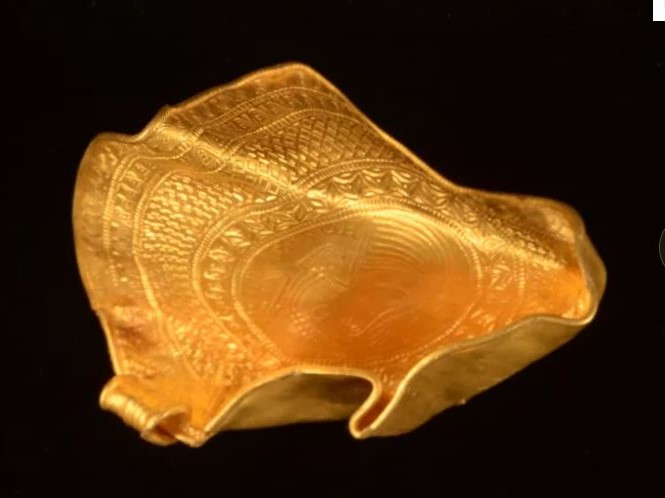 A golden piece of jewelry from the hoard. (Image credit: Conservation Center Vejle)

That chieftain could have buried the stash in the wake of a large volcanic eruption that rocked Europe in A.D. 536, when it sent a cloud of sulfate and ash into the atmosphere that blocked sunlight and lowered temperatures in the Northern Hemisphere. It’s unclear where the volcano was located, but its eruption can likely be blamed for the famine, pandemics and socioeconomic decline that followed, a 2015 study in the journal Nature found.

In the years following the eruption, many people in Scandinavia buried hoards, possibly to protect them from enemies or to appease the gods, according to Vejle Museums. In fact, more than 88 pounds (40 kg) of gold buried during the Iron Age has been found in Denmark, museum representatives said.

The Vindelev hoard will go on display in Vejle Museums’ Viking exhibition, which opens Feb. 3, 2022. The exhibition, a collaboration with Denmark’s Moesgaard Museum, will delve into the story of Harald Bluetooth’s Eastern connections and alliances, and explain how the early Danish kingdom laid the foundation for the Jelling dynasty.