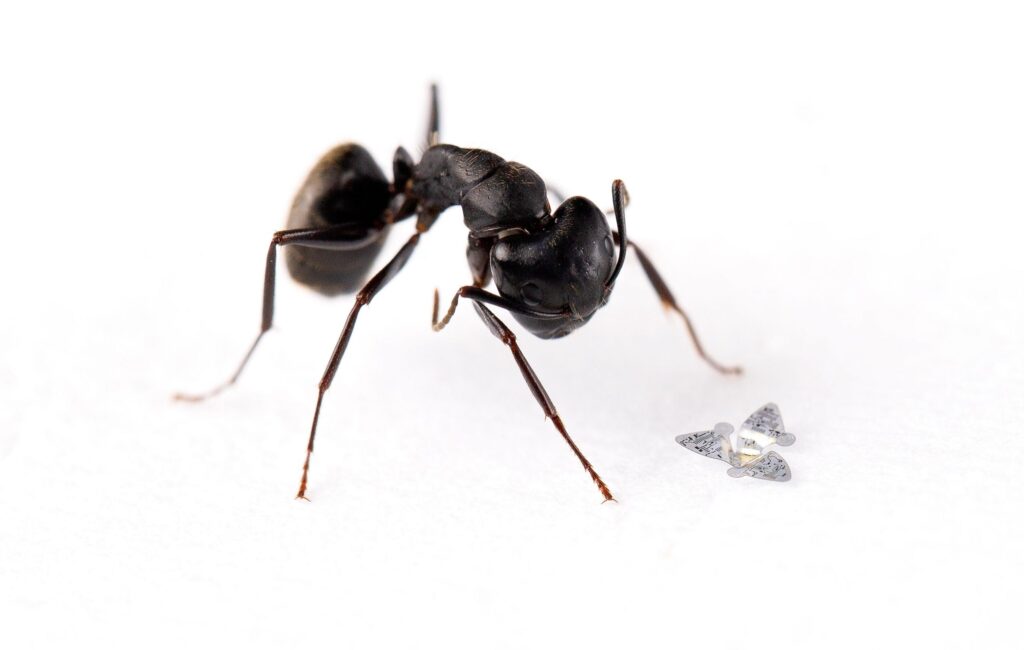 A 3D microflier sits next to a common ant to show scale. Credit: Northwestern University

The size of a grain of sand, dispersed microfliers could monitor air pollution, airborne disease, and environmental contamination.

About the size of a grain of sand, the new flying microchip (or “microflier”) does not have a motor or engine. Instead, it catches flight on the wind — much like a maple tree’s propeller seed — and spins like a helicopter through the air toward the ground.

By studying maple trees and other types of wind-dispersed seeds, the engineers optimized the microflier’s aerodynamics to ensure that it — when dropped at a high elevation — falls at a slow velocity in a controlled manner. This behavior stabilizes its flight, ensures dispersal over a broad area and increases the amount of time it interacts with the air, making it ideal for monitoring air pollution and airborne disease.

A close-up of a 3D microflier, outfitted with a coil antenna and UV sensors. Credit: Northwestern University

As the smallest-ever human-made flying structures, these microfliers also can be packed with ultra-miniaturized technology, including sensors, power sources, antennas for wireless communication and embedded memory to store data.

The research is featured on the cover of the September 23, 2021, issue of Nature. 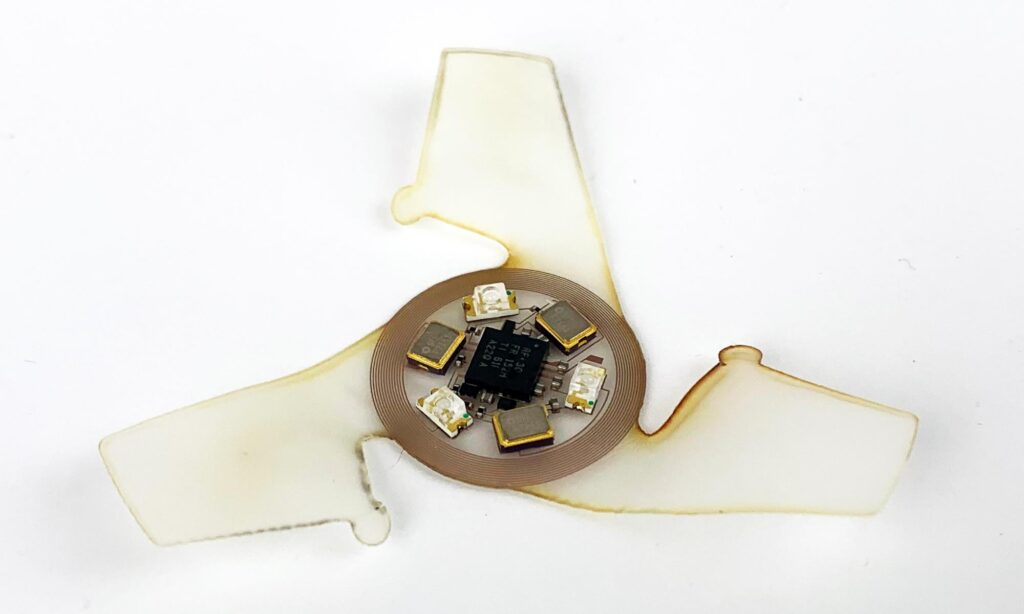 “Our goal was to add winged flight to small-scale electronic systems, with the idea that these capabilities would allow us to distribute highly functional, miniaturized electronic devices to sense the environment for contamination monitoring, population surveillance or disease tracking,” said Northwestern’s John A. Rogers, who led the device’s development. “We were able to do that using ideas inspired by the biological world. Over the course of billions of years, nature has designed seeds with very sophisticated aerodynamics. We borrowed those design concepts, adapted them and applied them to electronic circuit platforms.”

‘We think we that beat nature’

Most people have watched a maple leaf’s whirling propeller seed spin through the air and gently land on the sidewalk. This is just one example of how nature has evolved clever, sophisticated methods to increase the survival of various plants. By ensuring that seeds are widely dispersed, otherwise sedentary plants and trees can propagate their species over vast distances to populate broad areas.

“Evolution was likely the driving force for the sophisticated aerodynamic properties exhibited by many classes of seeds,” Rogers said. “These biological structures are designed to fall slowly and in a controlled manner, so they can interact with wind patterns for the longest-possible period of time. This feature maximizes lateral distribution via purely passive, airborne mechanisms.”

To design the microfliers, the Northwestern team studied the aerodynamics of a number of plants’ seeds, drawing its most direct inspiration from the tristellateia plant, a flowering vine with star-shaped seeds. Tristellateia seeds have bladed wings that catch the wind to fall with a slow, rotating spin.

Rogers and his team designed and built many different types of microfliers, including one with three wings, optimized to similar shapes and angles as the wings on a tristellateia seed. To pinpoint the most ideal structure, Huang led full-scale computational modeling of how the air flows around the device to mimic the tristellateia seed’s slow, controlled rotation.

Based on this modeling, Rogers’ group then built and tested structures in the lab, using advanced methods for imaging and quantifying patterns of flow in collaborations with Leonardo Chamorro, an associate professor of mechanical engineering at the University of Illinois at Urbana-Champaign.

The resulting structures can be formed across a wide variety of sizes and shapes, some with properties that can give nature a run for its money.

“We think that we beat nature,” Rogers said. “At least in the narrow sense that we have been able to build structures that fall with more stable trajectories and at slower terminal velocities than equivalent seeds that you would see from plants or trees. We also were able to build these helicopter flying structures at sizes much smaller than those found in nature. That’s important because device miniaturization represents the dominating development trajectory in the electronics industry, where sensors, radios, batteries and other components can be constructed in ever smaller dimensions.”

From plants to pop-up books

To manufacture the devices, Rogers’ team drew inspiration from another familiar novelty: a child’s pop-up book.

His team first fabricated precursors to flying structures in flat, planar geometries. Then, they bonded these precursors onto a slightly stretched rubber substrate. When the stretched substrate is relaxed, a controlled buckling process occurs that causes the wings to “pop up” into precisely defined three-dimensional forms.

“This strategy of building 3D structures from 2D precursors is powerful because all existing semiconductor devices are built in planar layouts,” Rogers said. “We can thus exploit the most advanced materials and manufacturing methods used by the consumer electronics industry to make completely standard, flat, chip-like designs. Then, we just transform them into 3D flying shapes by principles that are similar to those of a pop-up book.”

The microfliers comprise two parts: millimeter-sized electronic functional components and their wings. As the microflier falls through the air, its wings interact with the air to create a slow, stable rotational motion. The weight of the electronics is distributed low in the center of the microflier to prevent it from losing control and chaotically tumbling to the ground.

In demonstrated examples, Rogers’ team included sensors, a power source that can harvest ambient energy, memory storage and an antenna that can wirelessly transfer data to a smart phone, tablet or computer.

In the lab, Rogers’ group outfitted one device with all of these elements to detect particulates in the air. In another example, they incorporated pH sensors that could be used to monitor water quality and photodetectors to measure sun exposure at different wavelengths.

Rogers imagines that large numbers of devices could be dropped from a plane or building and broadly dispersed to monitor environmental remediation efforts after a chemical spill or to track levels of air pollution at various altitudes.

“Most monitoring technologies involve bulk instrumentation designed to collect data locally at a small number of locations across a spatial area of interest,” Rogers said. “We envision a large multiplicity of miniaturized sensors that can be distributed at a high spatial density over large areas, to form a wireless network.”

But what about all the electronic litter? Rogers has a plan for that. His lab already develops transient electronics that can harmlessly dissolve in water after they are no longer needed — as  demonstrated in recent work on bioresorbable pacemakers. Now his team is using the same materials and techniques to build microfliers that naturally degrade and disappear in ground water over time.

“We fabricate such physically transient electronics systems using degradable polymers, compostable conductors and dissolvable integrated circuit chips that naturally vanish into environmentally benign end products when exposed to water,” Roger said. “We recognize that recovery of large collections of microfliers might be difficult. To address this concern, these environmentally resorbable versions dissolve naturally and harmlessly.”

The study was supported by the Querrey Simpson Institute for Bioelectronics at Northwestern University. In addition to Rogers and Huang, co-corresponding authors include Leonardo Chamorro of the University of Illinois and Yihui Zhang of Tsinghua University in China. The paper’s first authors are Bong Hoon Kim of Soongsil University in Korea, Kan Li of Huazhong  Rogers’ lab at Northwestern. 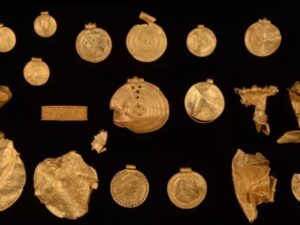