Electric car charging stations and eco-friendly design tap into a growing desire for wellness and environmentalism, and can boost a property’s profile. 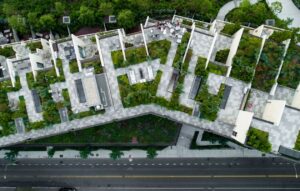 For many luxury buyers, having a home that’s designed for sustainability has long seemed nice in theory, but also connoted austere, crunchy aesthetics, plus the added expense of installing green technology.

Between the rapid rise of electric cars as a status symbol; a growing number of developers turning out high-design green buildings; and a broader concern for wellness that’s grown out of the Covid-19 pandemic, the tide is quietly turning in favor of green homes and buildings.

For sellers and developers, adding in eco-friendly features can help a listing stand out from its competition, and potentially speed up sales. But it’s best to be strategic about it.

“We’re just scratching the surface, and it’s going to become the norm in the coming years,” said David Parnes, a principal with The Agency in Los Angeles. “Houses that are using [sustainable features] right now are the exceptions, and therefore giving themselves a great marketing tool and platform.”

In the Palm Beach Florida, area, “As of recently, we’ve seen a big increase in the demand for things that are either certified green, or have electric car chargers,” said Cameron Sydenham, a Florida-based agent with Corcoran. “Up until a couple of years ago, nobody even asked.”

The trend has taken off so quickly that some developers have found themselves scrambling to catch up while a project is still under construction.

“I’m working on a condo complex in Delray Beach, and while we were under construction, we had a number of buyers ask for an [electric] car charging outlet,” Mr. Sydenham said. “In the course of building the project, the developer changed his plans, went to the city, and added six car charging spaces linked to those units we were selling.”

Mr. Sydenham added, “Buyers were not going to buy if we didn’t have that.”

The importance of luxury homes that support electric vehicles will only grow as prestige auto makers beyond Tesla, from Bentley and Porsche to Jaguar Land Rover, have doubled down on electrification.

Meanwhile, views of property listings that fall under the “energy efficient” category have jumped 9.9% in the past year, according to data from Redfin, while the number of listings that include such features has dropped by 13.6%, indicating a moment of opportunity for sellers and builders looking to get out ahead of growing demand.

“I think as this next generation of millennials morphs from renter to buyer, we’re going to see developers responding more quickly to their needs, whether that be rooftop or indoor vertical farms, or car charging stations,” said Stephen Kliegerman, president of Brown Harris Stevens Development Marketing.

Sustainability Gets Swept up in Wellness Trends

Since the start of the pandemic in early 2020, luxury buyers have placed a sudden emphasis on building features like air filtration and UV lighting, health-supporting amenities that previously hadn’t been high on many condo hunters’ wish lists.

In some respects, this newfound focus on health has also raised the profile of eco-friendly amenities, with sustainability, health and cleanliness getting wrapped up into a broader sense of overall “wellness.”

“Electric car chargers, infrared technology, solar paneling, we’re going to see that as expected in just a few years,” Mr. Parnes said. “It’s all about wellness, and I think a lot of that has been accentuated by Covid. [Sustainability] is almost like a health brand, or a stamp of approval from a health perspective.”

Some new luxury buildings coming online are betting on the combination of health and sustainability amenities as a selling point, and seeing significant amounts of interest as a result.

Charlotte of the Upper West Side, a new luxury apartment building on New York City’s Upper West Side that’s expected to launch sales later this year, has been built to meet passive house standards (which require very low energy use in buildings), with airtight insulation that both reduces noise and energy consumption, and supports a high-tech air filtration system that allows residents to boost an apartment’s fresh air intake from an app on their phones.

“[Prices] start at over $10 million for four-bedroom apartments, and people are not deterred,” said Compass agent Alexa Lambert, one of the agents marketing the building. “We have so many people champing at the bit to get in. People are going to be very happy to pay up to get these things.”

The push for greener features may soon extend into smaller, more trend-influenced apartment amenities, as well.

“The appliance of the decade has been the wine cooler. But how many people really need that, or use it to take care of expensive bottles of wine?” Mr. Kliegerman said. “They make indoor farms that are the same size and configuration as a wine cooler, and you could grow your own produce instead of keeping wine at 45 degrees. I think that kind of thing is what you’re going to see coming into buildings next.”

Between Tesla’s increasing ubiquity as a luxury item and General Motors’s recent commitment to phase out gas-powered cars by 2035, electric cars are here to stay, and savvy sellers and developers are working to catch up to the demand.

“If I’m meeting with a builder, I’m 100% telling him he needs [electric car charging] in there,” Mr. Sydenham said. “There’s a lot more momentum than people think, and I would bet that by the end of 2021 there’s going to be a massive spike in electric car owners that is not even on the radar yet.”

And unlike solar panels or full passive-house design, for individual homeowners, charging stations are a relatively simple amenity to add during the renovation process, or in advance of a sale.

“Something like this is very reasonable to do, it’s not expensive,” said Francisco J. Fuertes, a Miami-based agent with Brown Harris Stevens, who also works as a general contractor involved in high-end construction projects in the area. “If you’re remodeling to the extent that you can run that new [electrical] line where you want it to be, for sure it’s something that I recommend.” (Realtor.com has previously estimated the cost of installing a charging station as ranging between several hundred dollars up to approximately $2,000.)

“Most of our buyers now, if a building has parking, they do ask about electric chargers,” Mr. Kliegerman said. “It’s going to become more popular without a doubt.”

Solar Is Slower to Catch On, But Offers Enticing Savings

From an immediate cost-benefit standpoint, solar panels are a more complicated (and expensive) proposition, and have yet to achieve broad popularity.

“When it comes to solar panels, that’s a very specific buyer—they were driving the electric car way before it became popular,” said Lytel Young of Corcoran Global Living in Los Angeles. “If a seller does have solar panels or things like that that are higher efficiency, I’ll definitely highlight it. It’s not until a buyer realizes these features exist on a property that they become interested.”

High up-front installation costs can also make buyers balk, but are easier to justify in markets like New York City, where energy costs can add up to a significant monthly expense, and tax credits now encourage the installation of energy-efficient technology.

“I have many clients who say, ‘I’m going to sell in a few years, what should I do to get my house ready,’” and I tell them to put a solar panel on their roof,” said Leigh Wallace, an agent with Brown Harris Stevens in New York City. “It will help you get a tax credit now, and it’s one more thing that will make your house more saleable.”

For a New York City townhouse, solar panel installation can cost between $35,000 and $45,000, depending on the size of the system, said Steve Nelson, director of sales for Brooklyn Solar Works. Energy bill savings can add up to $1,500 to $2,000 per year.

Between tax breaks and energy savings, Mr. Nelson said, “The payback period for a lot of these systems is usually eight years, give or take. If you sell before then, you could recoup that investment [in the sale price], and the new purchaser would hit the ground running with a reduced utility bill.”

A 2019 Zillow study found that homes with solar panels in the U.S. sold for an average premium of 4.1% over similar properties, a number that jumped to 5.4% in the New York City market.

“Resale is becoming more and more of a conversation we’re having,” Mr. Nelson said. “There’s a slight edge for a home that already has a fully functional solar system on the roof from day one. If a buyer is considering two similar $4 million brownstones, the one that has a reduced operating cost is more compelling.”

1007 Bergen, a forthcoming development in Brooklyn, is being designed with solar panels and a green rooftop, and Ms. Wallace said, “People are very excited to buy something that’s plug and play, versus having to spend the money themselves.”

For buyers in luxury buildings, environmentally conscious purchases still tend to need to incorporate high design and state-of-the-art finishes in order to turn heads, and ideally, save money on their monthly energy costs as well.

“People aren’t going to want to live in an ugly apartment with a hideous raw wood bathroom, but if they can live in a beautiful apartment and also say, ‘We’re good people, we live in this totally sustainable building,’ it gives you some swagger in your community,” Ms. Lambert said.

“If anything, buyers are willing to pay a premium to be more green,” Mr. Sydenham added. “For them, it’s a status symbol.”