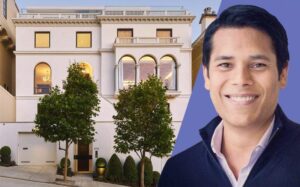 Tolia listed the Pacific Heights home for $25 million, according to the Wall Street Journal. Tolia bought it in 2011 as a wedding present for his wife, Megha Tolia, three years after founding the neighborhood-centric social network.

Tolia said that ultimately his family plans to find a house outside San Francisco proper, but plans to temporarily relocate to Florence, Italy.

The three-story home has six bedrooms and dates from the 1910s. It was designed by architect George Applegarth in the Beaux-Arts style that was popular at the time.

The Tolias spent three years renovating the property. They rebuilt most of the interior in a subdued contemporary style but retained and restored some of its original features including the coffered ceiling.

The top floor master suite has wraparound windows with views of San Francisco Bay and the Golden Gate Bridge.

The open kitchen and living room area leads to the backyard through sliding floor-to-ceiling doors. The backyard has a hillside garden and a lawn. There’s also a two-car garage.

Tolia was CEO of Nextdoor until 2018 when he became chairman. He also runs an advisory company, Early Stage Internet Companies, that has advised companies including Zillow, Minted, and SurveyMonkey, according to LinkedIn.