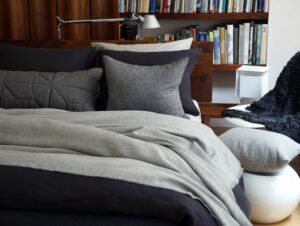 If you want your bedroom to serve as a refuge from daily stress, one piece of furniture is more important than all the rest: the bed.

But you need to do more than just choose a good mattress and bed frame. How you dress the bed — whether you create a pared-down crash pad of white linen, say, or a mountain of down topped by a pile of colorful pillows — affects the way a room feels.

It’s similar to fashion, said Deanna Wu, the vice president of merchandising at the bedding company Brooklinen: The way you dress your bed should communicate something about how you want to live.

“Do you want it to have colors, layers of texture and a feeling of whimsy? Or do you want it calm?” she asked. “You can dress your bed as you dress yourself. It can be a reflection of your mood and style.”

We asked interior designers and bedding experts for advice on the basics, from fitted sheets to decorative throw pillows, as well as tips for dressing a bed that looks appealing during the day and encourages snuggling at night.

Begin With the Sheets

Sheets are the undergarments of the bed: You won’t see much of them when the bed is fully dressed, but they have a noticeable effect on comfort because they’re in direct contact with your skin.

High-quality sheets are most frequently offered in different cotton weaves, usually percale or sateen, or in linen, and no choice is better than the others. It all depends on personal preference.

Cotton percale is a plain weave with a relatively matte look and feel. “It’s a very breathable fabric, and kind of crisp and cool to the touch,” said Anki Spets, the founder of the bedding company Area. “You can even put your hand on it in the store, and the percale will feel cooler than the sateen.” Percale is popular with people who often feel too hot under the covers.

Sateen sheets are woven to offer a silkier, luxurious feel. “It has a much smoother top finish,” Ms. Spets said. “It’s so soft, it’s irresistible when you touch it. But they can also feel a little warmer to sleep in, so that’s where you have to know what you like.”

Linen sheets are another popular option, but they aren’t for everyone. “They have a more organic, earthy look,” Ms. Spets said, with a more noticeable texture. They also have a tendency to show wrinkles, a quality that some people view as problematic but others prize as a sign of relaxed, informal living. High-quality linen sheets tend to breathe well and absorb moisture, so they feel cool like percale, Ms. Spets said, while lower-quality options may be thicker and warmer, or even feel rough against the skin.

Choose sheets by feel and appearance rather than thread count. An extremely high thread count, once seen as a sign of quality, doesn’t count for much anymore because it’s possible to inflate the number while using lower-quality fibers.

“Thread count is more of a marketing tool that was brought out in the early 2000s,” said Jenifer Foley, the lead stylist at Frette, adding that higher thread counts can sometimes result in thicker, less breathable sheets.

What’s underneath the fitted sheet matters too. If your mattress isn’t as comfortable as you’d like, consider adding a mattress pad.

“I like to start with a really nice mattress pad that gives you a little padding underneath the sheet,” said Chad Dorsey, an interior designer based in Dallas, who frequently uses a Hotel Collection pad from Macy’s. “It doesn’t get too hot and has just the right amount of volume.”

There are two basic strategies for bringing warmth to a bed: adding a duvet or using a bedspread, sometimes in combination with a blanket.

For years, down-filled duvets, wrapped in duvet covers, have been de rigueur. They are so fluffy, comforting and good at regulating temperature that many people abandon their top sheets altogether, adopting a European-style approach to making a bed with a fitted sheet and a duvet — and nothing else.

If you don’t use a top sheet, the choice of fabric for your duvet cover matters more, and it should have a similar feel to that of your fitted sheet. For that reason, some duvet covers are made with a sandwich of two materials. “A lot of our duvet covers that have an ornate jacquard on the top, the underside is actually just a plain sateen weave, so what’s touching your skin is still soft,” Ms. Foley said.

One advantage to this way of dressing a bed is that it’s easy to make it in the morning — just pull up the duvet and you’re done. Of course, it’s perfectly acceptable to use a top sheet with a duvet, if you prefer. In that case, Ms. Foley recommended folding the top sheet over the top 15 inches of the duvet, at the head of the bed, for comfort and a decorative touch.

But now bedspreads, coverlets and quilts — once elbowed out by duvets — are making a comeback. Many interior designers are embracing them, and companies like Coyuchi, Parachute Home and Hale Mercantile are introducing more options.

“Five years ago, it was always about this chunky duvet you had to deal with, and it was impossible to find a bedspread,” said Jayne Michaels, a founder of the New York-based interior design firm 2Michaels. “Now it’s changed, and you can find great coverlets and bedspreads again, which we prefer.”

A bedspread allows your bedding to change with the seasons, Ms. Michaels said, by making it easy to layer wool blankets underneath in the winter and to remove those blankets in the summer. The look of the bed also tends to be more tailored than a bed with a duvet.

If you can’t decide which approach is best, it’s possible to do both. Mr. Dorsey has dressed some beds with a bedspread before adding a folded duvet at the foot of the bed. Other designers do the opposite and cover the mattress with a duvet, then place a thin, folded quilt at the end.

“There’s definitely room to mix and match and play,” said Ms. Wu, of Brooklinen. “Depending on my mood, I might flip to a more colorful option, like a beautiful combo of lavender and toasted almond with some dark pillowcases.” Other days, she dresses her bed in menswear-inspired stripes.

Unlike choosing upholstery fabric for a sofa, the stakes are low, because it’s easy to change the colors. “There’s really no way to go wrong,” Ms. Wu said.

Mr. Greene also likes to break from plain, all-white bedding, and focuses on playing up texture instead. “The bed is a big thing in the room to just have one color, in one texture,” he said. “The thing that looks the best, I think, is having different textures.”

In one bedroom, he layered the bed with fine cotton sheets, a waffle-weave bedspread and a linen duvet cover and shams, in various shades of gray, and then added a striped decorative pillow with a rugged weave.

As you add decorative touches, just remember that you’ll have to fluff, fold and tuck those things into place every morning.

“It should all be simple and easy to put together,” Mr. Dorsey said. “I’m a fan of making my bed every day.”