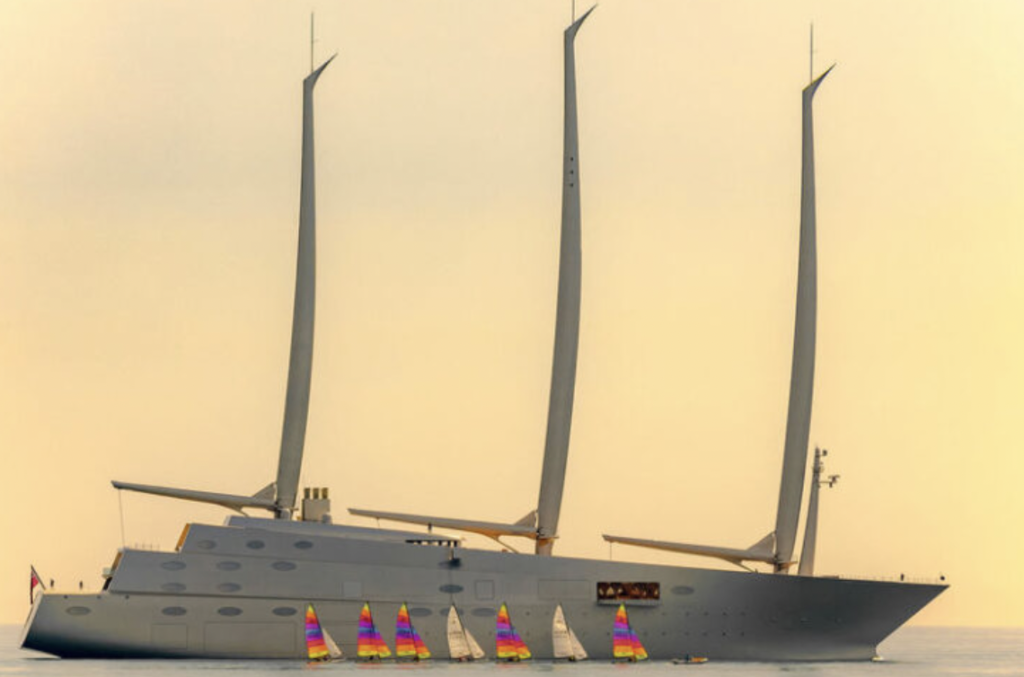 The trophy sailboat of EuroChem Group founder Andrey Melnichenko is the latest bit of Russian-owned seaworthy bling to become mired…or moored…in sanctions. The yacht itself is something of a design departure from the usual diesel-powered luxury leviathans that Russian oligarchs use to one-up each other.

Melnichenko’s links to the briny extend beyond yacht ownership; they include ownership of an entire seaport, JSC Murmansk Commercial Port. Melnichenko-controlled companies collectively own over 90% of the capital of the Murmansk port.

Melnichenko’s sailing superyacht was seized in Italian waters and is currently in dry dock in Trieste, Italy. The half-billion-dollar yacht has been given a rather perfunctory name: Sailing Yacht A, or S/Y A for short. The fact is, it is one of a set; Melnichenko’s other notable seacraft is Motor Yacht A.

And, the craft’s adventurous design — it combines three-mast DNA with a kind of steely, invincible-looking militancy — speaks for itself. So does its size; at nearly 470 feet, it is the world’s largest sailing yacht. Another entry in the category is the 350-foot Black Pearl.

The seizure of Sailing Yacht A must have been a little awkward, to say the least; in 2019, Melnichenko was awarded the Commendatore of the Order of the Star of Italy “for encouraging dialogue and economic cooperation between Italy and Russia.”

Sailing Yacht A was built by German yard Nobiskrug and launched in 2017. Like Motor Yacht A, Sailing Yacht A was designed by eclectic French designer Phillipe Starck. Her masts are carbon fiber; the largest of them is 300 feet tall. Sailing Yacht A can navigate doldrums by virtue of a hybrid quartet of MTU diesels and electric motors.

Sailing Yacht A can sleep 20, and accommodate her substantial crew of 54. She has a top speed of 21 knots, and cruises at 16.

Melnichenko’s strong business acumen saw him open his own bank, MDM Bank, in 1993 at the tender age of 21. And while other would-be oligarchs feasted on the post-Soviet privatization bonanza, Melnichenko marched to the beat of his own drum, refining his conservative credit policy and steadily absorbing regional competitors. MDM Bank thrived especially when the Russian financial crisis hit in 1998 thanks to its low risk exposure. It earned several awards in the early 2000s including “Bank of the Year” and “Best Russian Bank.”

Melnichenko exited the banking field in 2007 to focus on EuroChem and SUEK (Siberian Coal Energy Company). He stepped down from both companies earlier this month after he appeared on the U.S. sanctions list. He called the measure “absurd and nonsensical” and said there was “no justification whatsoever” supporting any action against him. On the spectrum of Russian billionaires, Melnichenko may fall closer to self-made business tycoon. In which case, any close association with Putin—real or perceived—may be more self-preservation instinct than self-serving cronyism. Further, Melnichenko’s mother is Ukrainian.

Melnichenko’s net worth is around $13 billion.