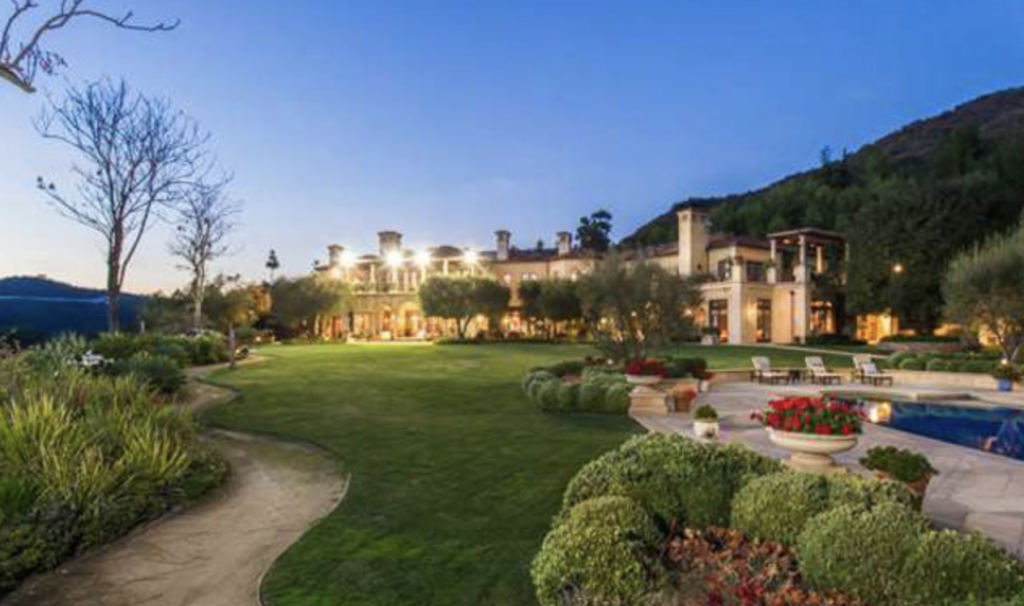 With his Hidden Hills compound on the market at $22.2 million, hip hop royalty Drake was in need of a new place to hang his hat. The rapper found it in this celebrity heirloom, which was originally owned by Guess co-founder Maurice Marciano (Marciano’s other heavyweight L.A. estate, now owned by casino billionaire Steve Wynn, is currently on the market at $100 mil). The seller this time was English pop megastar Robbie Williams. He may not be a household name in the U.S., but the sale price should make a convincing case of his success.

The house, which changed hands this month at $75 million, is located at a cul-de-sac in the Beverly Hills Post Office neighborhood. The main house is a behemoth of a villa, with three levels to its credit; with the guest house, the property’s total interior square footage comes in at 24,260, with ten bedrooms and eighteen baths in all. Specialty rooms include a library..

The property’s acreage is a matter of conjecture but appears to be in the neighborhood of 15-20 acres. In any case, there’s enough space for a sprawling lawn, walking paths, and a pool and pool house, and the hilltop lot brings in fine views of L.A. environs.

Drake’s Hidden Hills properties are also available individually and include the singer’s main estate, currently asking $14.8 million, as well as the auxiliary residences that share property lines with it. Those two properties include a 3,645 sq. ft. rambler priced at $4.5 million, and a 2,500 sq. ft. midcentury ranch in need of love and priced accordingly at $2.9 million.

Everything Williams touches seems to turn into a chart-topping album. After releasing a pair of no. 1 albums with 90s pop sensation Take That, he decided to go solo. He’s released 12 albums since; save one, all reached the no. 1 position in the UK. They performed admirably in other countries as well. Williams has sold over 75 million records worldwide.

Drake has sold over 170 million records worldwide. He’s released six studio albums; all reached the top of the charts in the U.S. and, of course, his native Canada.